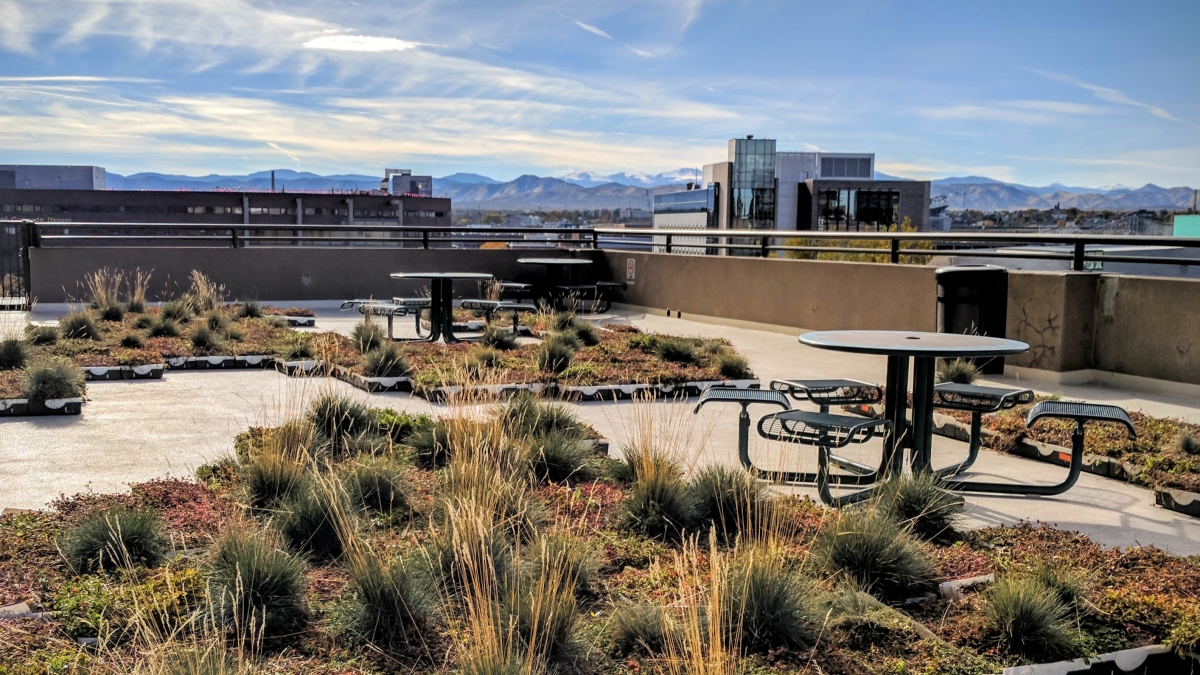 Updated Green Roof Ordinance is now the “Green Building” Ordinance – what does this mean for the future of Denver?

On November 7, 2017, the citizens of Denver, Colorado voted in favor of creating a Green Roof Ordinance for the city’s rapid development and in efforts to introduce sustainable initiatives and mitigate climate change threats. The ordinance was a true grass-roots effort, spearheaded by local Brandon Reithmeier and a small group of volunteers. Adopted from a policy model from Toronto, Canada, the ideology was to use Denver’s accelerating growth as a way to directly address concerns like Urban Heat Island (UHI) effect, stormwater management, and increase biodiversity within the urban corridor. (Denver Green Roof Initiative)

The ordinance required that any new commercial building over 25,000 sq. ft. would have to include at least 60% of the roof area to include a “green roof” – meaning designs allowing for vegetation to grow on these new edifices. The mandate also included that any roof retrofits or additions to these types of commercial buildings would fall under these regulations. (Denver Green Building Ordinance, City and County of Denver)

The designs, according to the accrediting non-profit Green Roofs for Healthy Cities, require materials such as a waterproof membrane, drainage and irrigation systems, growing media, and the living vegetation. (GRHC) Collectively, these materials and installations have shown to be costly, and also demand for high-load capacity of buildings due to their weights. These immediate concerns arose within the City Council after the mandate was passed, and consequently a Task Force teemed with local professionals, public officials, and concerned citizens were assembled to construct the appropriate wording of executing the construction of what the policy was suggesting. (Denver Green Building Ordinance, City and County of Denver)

After careful consideration from the Task Force and consulting with various industries like the local Denver government, real estate spokespeople, engineers, roofing companies, landscape architecture professionals, and horticulturists (to name a few), the Green Roof Ordinance evolved into the “Green Building Ordinance.” Taking into account that the majority of retrofits would not be structurally sound for these designs, as well as some of the immediate up-front costs that the ordinance required, proved difficult to focus solely on utilizing green roofs to combat the social and environmental concerns that Denver is facing. (Denver Green Building Ordinance, City and County of Denver)

On October 29th, 2018, almost one year later after the ordinance was voted in favor, the Green Building Ordinance was passed by City Council, which allowed for more construction and buildings to incorporate “green building” methods. The ordinance now includes options for off-site green spaces if the buildings don’t allow for green roofs, onsite solar, energy programs (for carbon offsets), and third-party green building certifications (such as the LEED programs). Regarding the cost and building limitations of these concepts, a combination of these options has also been allowed to encourage developers and business owners to accelerate the various ways in which to build sustainably. (Denver Green Building Ordinance, City and County of Denver)

So what does this mean for the future of Denver? There has been some pushback from developers in the obtaining of permits and execution of these designs, considering the concept of green roofs and their installation is still a new industry here in America and not as widely accepted or understood. However, with Denver’s rapid growth and development, the creation of this ordinance now opens the doors for new professionals to find work and boosting the local economy to include more variety of integrated design. The Green Roof for Healthy Cities non-profit has an accreditation for ‘Green Roof Professionals,’ meaning individuals within the professional construction, landscape, or architecture field can add a more knowledged and dynamic skill-set to the execution of these designs. It also helps address some of Denver’s 2020 Sustainability Goals, which Mayor Michael Hancock introduced in 2016 after the federal administration pulled out of the Paris Climate Agreement. Hoping to lower carbon emissions, increase the air quality, and better management of land use – the Green Building Ordinance now compliments these targets. (Office of Sustainability, City and County of Denver)

The Green Roof Ordinance at its inception was unprecedented. While modeled after Toronto, it was the first of its kind in the United States of America to be voted on by the local citizens, and adapted to quickly into the political infrastructure. It showed that the people of Denver care about seeing their city become more sustainable and empowered individuals to feel that they were taking climate action. The Green Building Ordinance, on the other hand, highlights how elected officials, local professionals, and concerned citizens can work together in achieving progress of implementing environmental standards in an thriving, urban setting.

Denver Green Roofs – Website for the Original Ordinance to inform citizens on the details and specifications of the mandate that appeared on the 2017 ballot.

Green Roof Healthy Cities – Website for the Non-Profit, which provides accreditation for Green Roof Professionals and sets the standard for Green Roofing practices in the United States.